For the third consecutive year, Churchill Downs is partnering with national leading lawn care provider TruGreen to ensure its world-famous course is in top shape in time for the Kentucky Derby®, set to air on May 4 on NBC with coverage beginning at 12 p.m. noon. Then, from 2:30 p.m. through 7:30 p.m. ET, tune in for the 145th Kentucky Derby on NBC. Located in Louisville, KY, Churchill Downs holds thoroughbred horse racing events in the spring and fall. 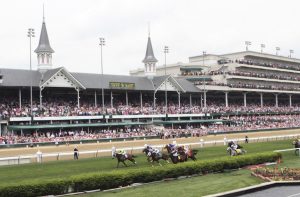 The 2019 Kentucky Derby will take place on May 4 at Churchill Downs in Louisville, KY.

TruGreen helps treat one of the highest-profile areas of Churchill Downs: the turf track. Just inside the dirt track, a seven-furlong track of green grass is available for other races throughout the year which TruGreen must work hard to maintain with the team at Churchill Downs and pay special attention to the details.

When we first started talking about the relationship with TruGreen, they became an extension of our team which is what has made this process so cohesive. While they are an outside company, the way they work around our schedules and needs with the track has been very helpful because of the fast-paced needs. The quality of work, applicators, and techs has been top notch and that’s essential to us because we need to know that it’s going to be done correctly.

According to Mark Rollman, TruGreen Region commercial sales manager, South Central Region (which encompasses Kentucky), “TruGreen is part of the team that treats several high-profile areas of turf at Churchill Downs. One of the most high-profile areas we assist with is the turf track that sits right inside the dirt track. Churchill Downs typically runs two to three races per race day on the turf surfaces throughout the year.”

“The turf at Churchill Downs is actually a combination of many different grasses,” added Rollman. “It started off as a mix of Kentucky Bluegrass and Kentucky 31 Fescue which over the years has been blended with other grasses such as Turf Type Tall Fescue. “We also assist with treating the famous turf at Aristides Garden and in the Paddock, where the horses are saddled just before the Kentucky Derby and other major races. Our team helps maintain the high-profile turf inside and outside the facility and provides vegetation control in the parking lots/cracks and crevices.”

More Than Just The Turf

In addition to the turf track, TruGreen helps manage several of the other landscaped regions of Churchill Downs. For example, the Paddock, where horses are prepared prior to major races, is covered in a layer of soft turf to keep horses and handlers comfortable and safe. The nearby Aristides Garden — named after the Kentucky Derby’s first winning racehorse — is tended with bright tulips and other blooms to honor racers past and present. Further, TruGreen treats the tiniest cracks and crevices around Churchill Downs where vegetation might grow, as weeds and other unwanted greenery can create structural instability in walls and walkways.  It is vital that landscapers know how to prevent growth as well as foster it.

TruGreen is a national brand with a rich history. Founded in 1973 in Michigan, TruGreen has rapidly become the nation’s number-one lawn care company. In fact, the company has been the official lawn care provider for PGA of America and the PGA Championship since 2015.

TruGreen’s partnership with Churchill Downs just makes sense. In addition to major sporting events, TruGreen proudly services home lawns and gardens, and the 170,000 guests at the Kentucky Derby — as well as the 16 million–plus TV viewers — add enormously to the company’s audience. Both Churchill Downs and the Kentucky Derby boast iconic branding, values, first-class customer service and a strong history of giving back to its community. Churchill Downs is excited about the continued opportunities we see with partnering with a strong brand like TruGreen.