Unfortunately, for many homeowners, landscaping is far down their list, whether they’re building or remodeling. So, you can imagine the delight of John Shandra, RLA, to be brought into the Focht project as the owners were contemplating an addition to their rural home.

Not only was he able to give them the outdoor rooms and pool they wanted on a challenging site, but the project was recognized by Hardscape North America for its combination of hardscape products on a residential project of more than 4,000 square feet.

He explains that the couple had bought the property for their retirement, returning to Pennsylvania after having lived in California. He believes that West Coast connection may have fueled their desire for a large outdoor living space. 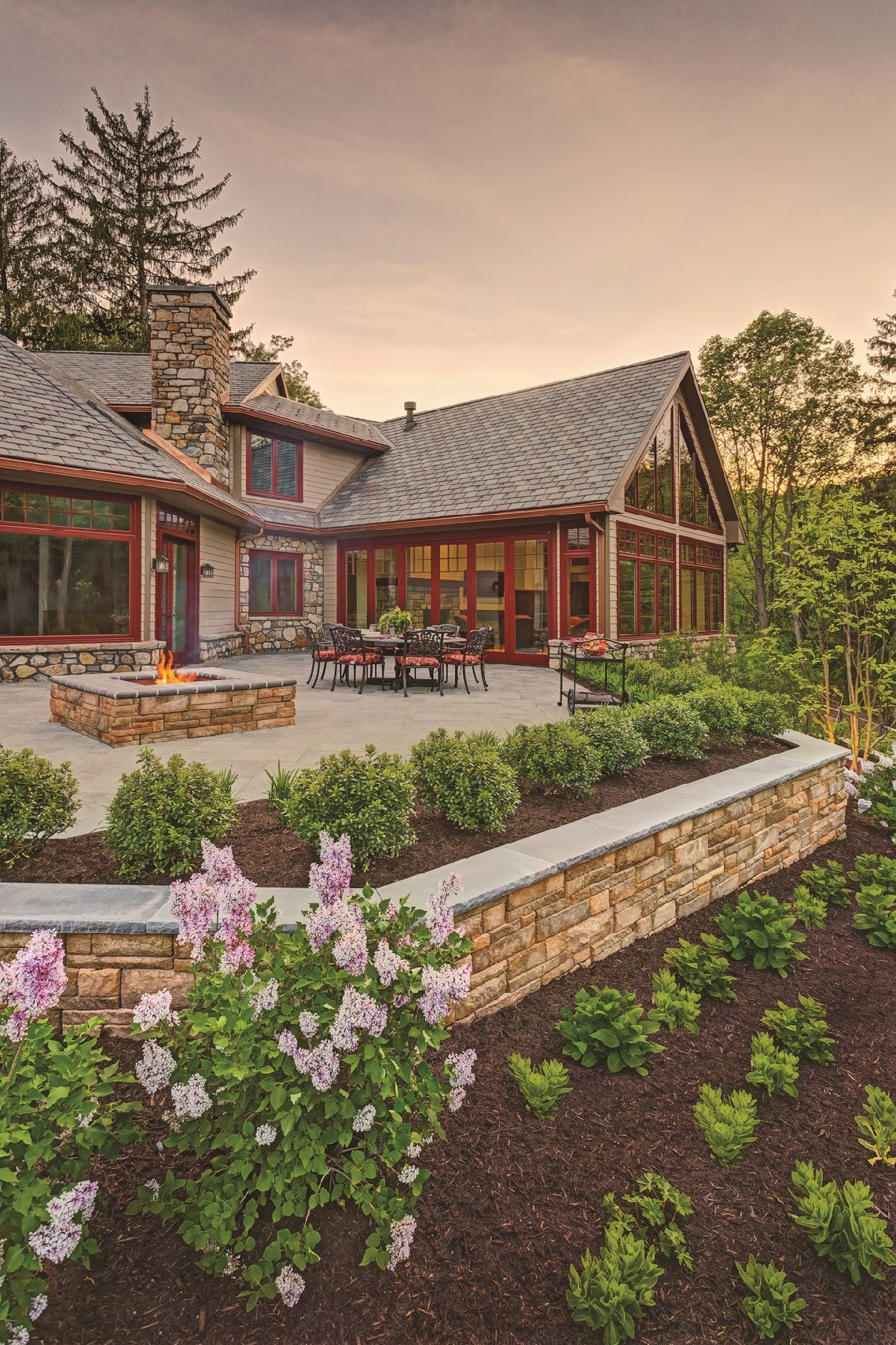 Shandra was brought into the project by the landscape contractor, Anawalt’s Landscape Contracting of Bernville, Pennsylvania, who had been referred to the Fochts by their general contractor.

The property itself is approximately 50 acres, with no more than 40 percent of that cleared, Shandra explains. And, if offers plenty of topographical changes.

“Where I’m based (Norristown, Pennsylvania), it’s fairly flat, but once you get into the Berks County area, it’s hilly,” he says. “There are definitely grade changes to the property and a couple ridges run through it.”

Also running through the property is a stream that widens into a pond behind the house. Rather than install a manmade water feature, the stream/pond provides a definite focal point to the landscape. However, as the list of client-desired options grew, Shandra realized an important aspect of the job would simply be defining and retaining the backyard. 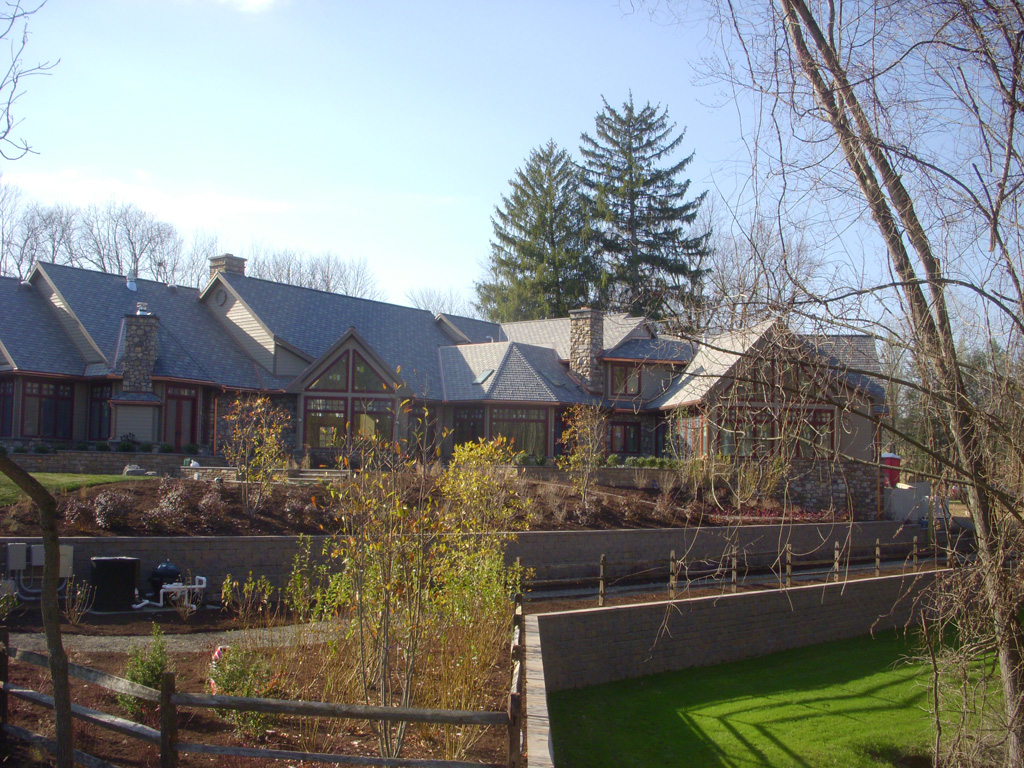 “There’s an EP Henry product called Mesa, which is a bigger block,” Shandra says. “We built approximately 430 feet of 5-foot high retaining walls in two terraces to build the backyard up. We had to create flat space.”

From there, Anawalt was able to install three separate patios coming down from the house and defined by shorter retaining walls. One adjoins a room in the home that Shandra describes as a combination kitchen and family room.

“It has a ton of cabinetry and cooking equipment, and it has a glass wall that opens up onto the patio,” he says. “One of the few things they told us was they were bringing this table back from California, and they really wanted space for it and chairs.

“We also always knew there was going to be a fire pit,” he adds.

Shandra says the fire pit is interesting because the clients really didn’t have any plans for it until they saw their spa going in and then requested it be in the same style. 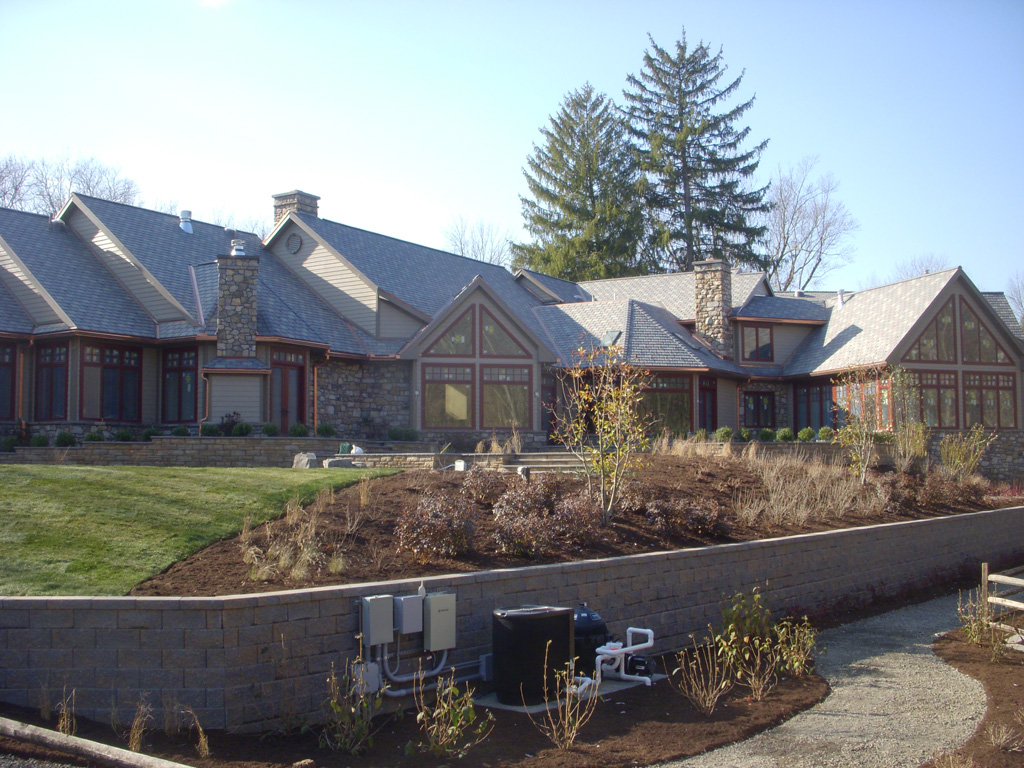 The fire pit is a main feature of the upper level of the patio, at the same level as the kitchen/family room. It also has a large dining table and living room-type furniture.

A few steps down is the outdoor dining room space. There a large table and chairs allows for larger groups to dine with plenty of room for circulation.

“Then, you step down a few more steps and that’s where the swimming pool itself is,” Shandra says. “There’s a large patio space that goes around the pool with room for lounge chairs and small tables and chairs for more dining or sitting and relaxing.”

While the spa is designed for year-round use, with equipment in the house, the pool is not, although it does have a heat pump system to extend its seasons. Equipment for that is below the first large retaining wall.

Shandra says the three patios incorporate some 3,400 square feet of EP Henry pavers, which are installed in what he calls a “random rectangular pattern.” 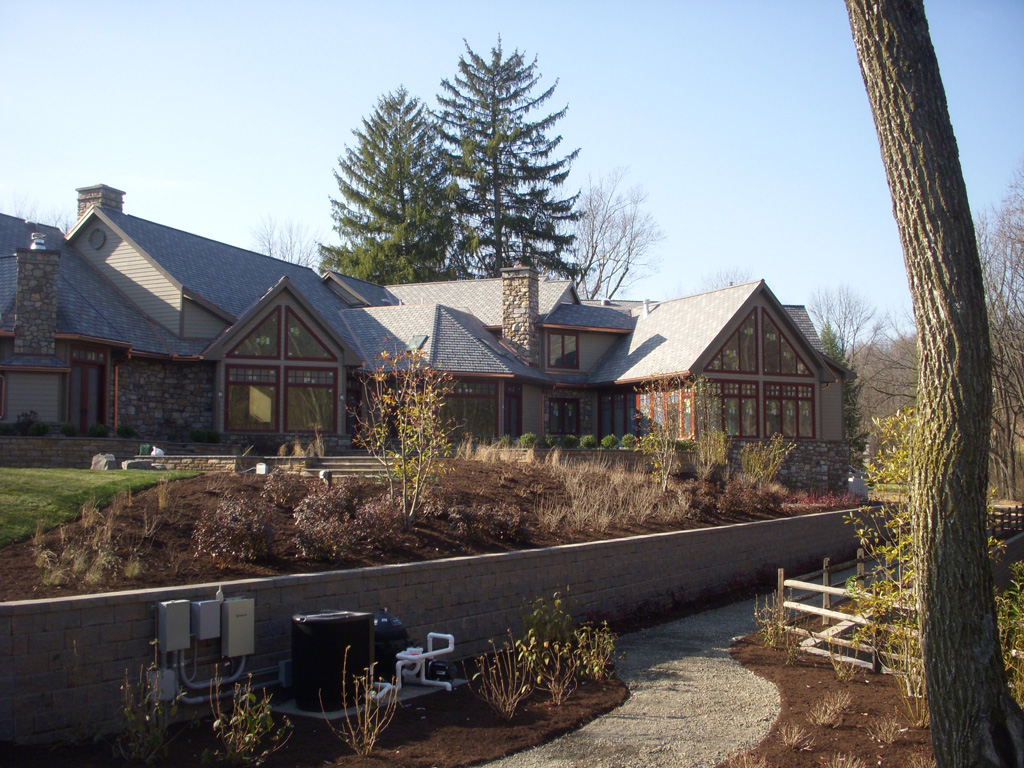 “There’s definitely a repeat in the pattern, but it has a random flow to it,” he says, adding that the material does a good job of mimicking the bluestone popular in the area, without the higher cost of installing bluestone.

In much the same way, the clients opted to go with EP Henry’s cast stone wall product, which was just coming on the market when this job was being built.

“You have the look of a stone wall, without having to excavate and have footers and foundations and then do the block work and stone veneering,” says Shandra. “We did bury a course of the wall to help hold it in place, but it goes in pretty darn quickly.”

While a small portion of the wall near the spa could be used for seating, it’s main role is retention. The walls also play a role in draining the site. Shandra notes that there’s enough elevation change on the property that the flow naturally goes toward the stream and pond.

“Water runs downhill through a series of plantings and then across a pretty big grassy area toward the stream,” he says. “Behind the walls there’s clean stone and piping to carry away any water that just percolates. We didn’t want to trap water behind the walls.”

There’s also a three-quarter-inch pipe to handle overflow from the pool.
Planting on the patios includes a mix of ornamental grasses – at the clients’ request – as well as a mix of herbaceous plants, shrubs and ornamental trees.

“Because this is almost in the middle of 50 acres, we didn’t have to worry about privacy plantings or border plantings,” he says. “Almost all of it is ornamentals with a lot of perennials.”

The job is also not extensively lit. Shandra says he abhors over-lighting, and lights from inside the house provide quite a bit of illumination for the patio space. However, the stairs have integral lighting under the treads and seven of the larger trees along the pond and stream are also lit. 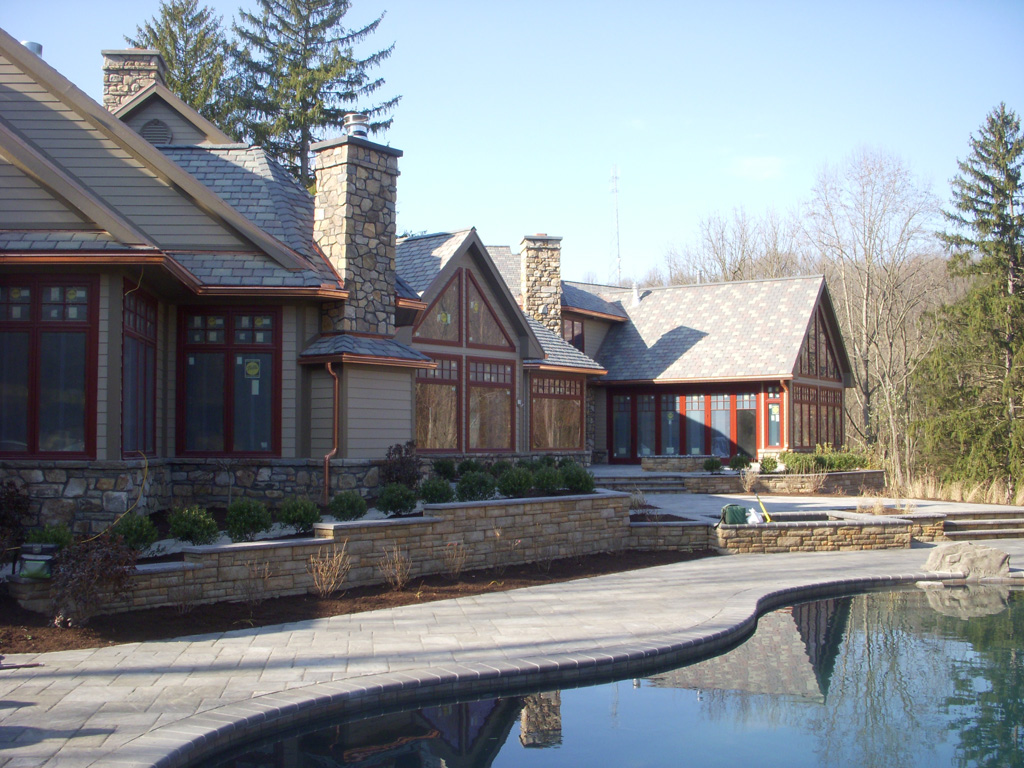 Shandra says he’s most proud of meeting the challenges of the job, which was built in approximately 10 months spread over a year Anawalt Landscape Contracting. That includes dealing with the home and the other existing features, including the stream and pond.

“It just really works,” he says. “It’s a project that fits into the setting well. When you walk to the other side of the pond and look toward the house, it really is seamless.”

However, he adds, there certainly were challenges.

“It’s hard when the homeowners are asking for all these pieces, and we have to say there isn’t enough room for that,” Shandra says. “It was a challenge just to express and explain things. Eventually, they understood it and it worked out well, but it was a lot of work, a lot of drawings and a lot of explaining.” 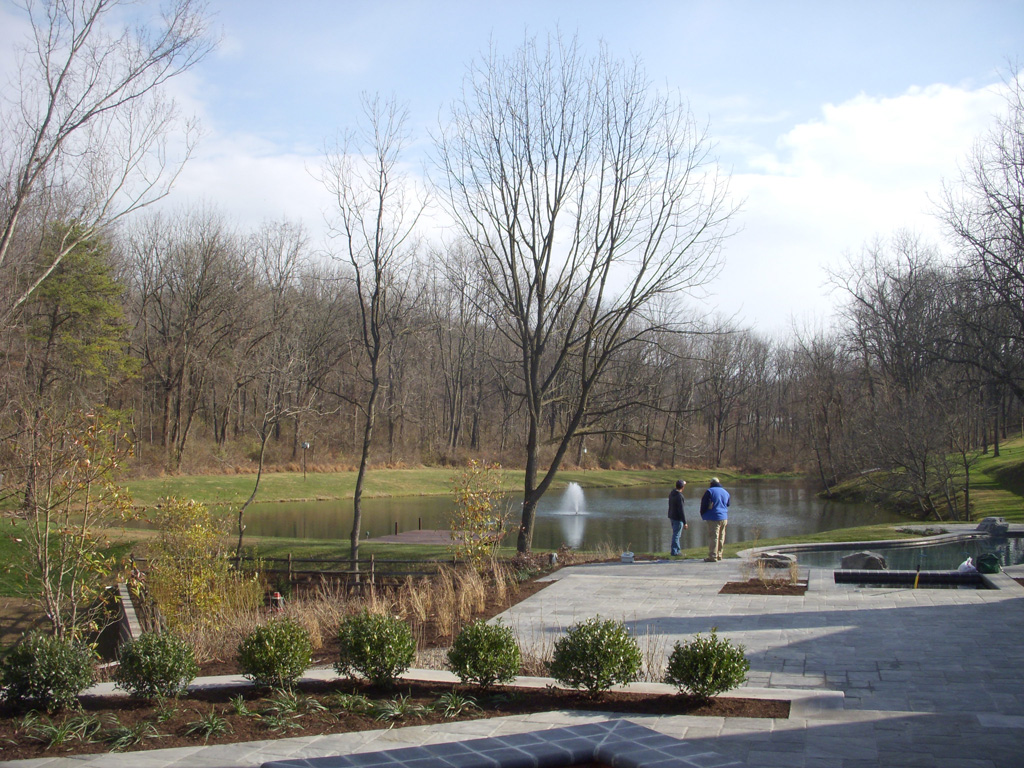 Communication seems to have been the key to the project’s success, however. And Shandra says this job also taught him to listen better.

“The homeowner was only available for very brief conversations and emails over a long period of time during the project,” he says. “It was a situation where we had to make every conversation count and really focus on the task at hand.”

The real bottom line, though is taking a difficult site and making it do what the client wanted.

“The house kind of got shoehorned into the valley and around the stream,” Shandra concludes. “We did a good job of nestling the backyard into the space we had and doing it well.”