To achieve this project for a high-end apartment building in Chicago, C.R. Schmidt of Warrenville, IL needed to find an effective installation approach.

Olivia Lockett is known colloquially as “the brick chick,” but she and her company are also developing quite a reputation for installing porcelain pavers.

For the second year in a row, Warrenville, IL-based C.R. Schmidt, Inc., took home the top prize from Hardscape North America (HNA) for its installation of a commercial porcelain project. At least part of the company’s success is due to its growing expertise in installing the pavers in an environment where some hardscape companies fear to tread: high in the Windy City sky. 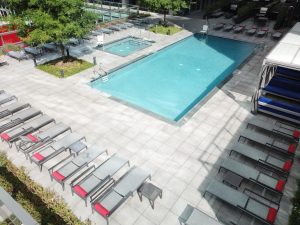 Lockett, the company’s president, explains that C.R. Schmidt was referred to Optima for the job by the manufacturer of the porcelain tiles, Tile Tech Pavers® of Vernon, Calif. Lockett and Tile Tech paired up for work on another premier apartment building in downtown Chicago that won the 2017 award.

“For this job, we were at the seventh level, the eighth level, the 20th, and then the roof,” Lockett explains. “Any time we’re getting into those high deck levels — and we typically mean anything above about the third floor of a building — wind uplift becomes really important.”

The use of porcelain in these situations is a mixed blessing. Not only does it give designers a tile-like look, but the weight in considerably lighter than conventional concrete pavers. That light weight also means that without the proper installation, uplift can pick them up and fling them around like frisbees.

One solution is to create a system that when combined with the pavers allows them to be anchored. Tile Tech, which besides manufacturing the porcelain pavers and the pedestals on which to mount them, has patented its own wind uplift system, which involves fastening four pavers to a plastic-like tray that combines to give the material being installed the approximate 2” depth of a standard paver. 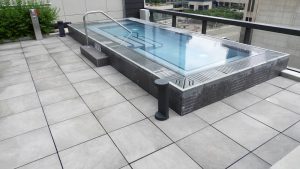 Since winning the 2017 HNA award, Lockett says C.R. Schmidt has used the system on several different projects in the Chicago area, so her crew was quite comfortable with that aspect of the Optima job.

Some other aspects of the job were standardized, while others were not. For instance, the designer used the same pavers on all four levels on which the company worked.

“The idea was consistency,” Lockett says. “They wanted the same general look on all the levels so they could design other things – such as the furniture – with the same color scheme.”

However, she says the mix of amenities on the different levels was amazing, and includes cabanas, spas, a rooftop pool, putting green, and even a dog run.

Also different from level to level was the height of the pedestals on which the pavers were installed.

“We had pedestals that ranged anywhere from 2” with very slim clearances, all the way to 2’,” she says. “All the drainage occurred under the paver surface, and a lot of the electrical was run under the pavers. We had a lot of conduit running under the pavers and then coming up through them at various points.”

Lockett adds at times that became a problem as the company worked to make sure those utilities came though in an attractive way, and that the pavers fit well with the bases of the different amenities.

“We’ve learned a lot about using this uplift system, but we really had to pay close attention to the layout of so many fixtures and site amenities,” she says. “It wasn’t anything new that we hadn’t dealt with before, but there was so much of it we had to get good at it really quickly.”

As with so many projects, speed was definitely required as Optima was anxious to get floors finished and turned over for resident move-ins. The approximately three-month project required C.R. Schmidt to beef up crews and extend work hours to meet the timeline the owner set.

Perhaps not surprisingly, Lockett says one challenge was getting materials delivered high in the air. The project relied on a mix of skip hoist, crane and freight elevator for deliveries. However, that was not the most-challenging aspect of the project.

“The most challenging part of the job was working on top of and with the other trades,” she says. “In theory, we should be the last trade out there, but a lot of the trades were still on-site, and we had to work around and with them to get it all closed up.”

Still, the issues were not enough to keep the company from completing the $650,000 tile job (C.R. Schmidt also did some work on-grade for the developer) well enough to catch the eye of the HNA judges – and Optima executives.

“We’ve been talking with them about some different developments they have across the country,” Lockett concludes. “For instance, they’re doing something similar in Arizona, so I believe we’ll be working with Optima in a similar capacity in the future.”