Last week a Massachusetts woman died of Eastern Equine Encephalitis (EEE). Three other human cases have been reported in the state this year, the first since 2013, according to the Massachusetts Department of Health (MDPH). Additionally, a goat and three horses have also tested positive for EEE.

Eastern equine encephalitis (EEE) is a rare but serious disease caused by a virus generally spread to humans through the bite of an infected mosquito. EEE can cause flu-like symptoms or brain infections. Approximately a third of all people with EEE die from the disease.

In total across Massachusetts, there are 24 communities now at critical risk, 24 at high risk, and 55 at moderate risk for the EEE virus. (See map.)“Although cooler weather will start to reduce mosquito populations, the season is not over yet,” said Public Health Commissioner Monica Bharel, MD, MPH. “We are urging people across the state to remember that the peak time for transmission of mosquito-borne illness extends through September here in Massachusetts.”

In the U.S., an average of seven human cases of EEE are reported annually, according to the Center for Disease Control (CDC). Most cases of EEE have been reported from Florida, Massachusetts, New York, and North Carolina. EEEV transmission is most common in and around freshwater hardwood swamps in the Atlantic and Gulf Coast states and the Great Lakes region.

Limit mosquito-friendly habitats. Female mosquitoes lay about 300 eggs during their six to  eight week lifespan. Because they favor breeding in standing water, it’s important to clean gutters, pick up garbage, and empty outdoor containers or buckets that can capture water. These efforts will decrease the habitats suitable for mosquito reproduction. 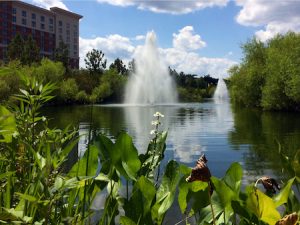 Circulate stagnant water. Aeration in lakes and stormwater ponds can do more than reduce bad odors and improve stagnant conditions; it can make a waterbody less appealing to breeding mosquitoes because their eggs require standing water to complete their life cycle.

Remove nuisance plants. Stagnant inlets in lakes and ponds are attractive to mosquitoes for breeding purposes, but can be better circulated when nuisance and invasive plants are removed. 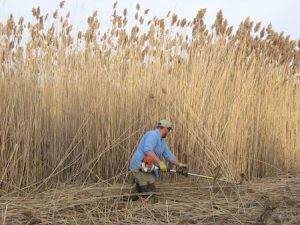 Cattails and phragmites are common plants responsible for creating stagnant water conditions. A professional lake manager can recommend effective removal methods based on the time of year and species present.

Attract dragonflies with native plants. Another mosquito predator is the dragonfly, which can feed on hundreds of larvae and full-grown mosquitoes each day. Consider planting beneficial buffer species like blue flag iris, pickerelweed, arrowhead, spatterdock, lizard’s tail and native grasses to attract predator dragonflies to the area.

Integrate sustainable biological larvicides. Natural and preventative methods can make an enormous difference, but disease-carrying populations may still be present throughout the summer. A more impactful approach is the professional application of a safe EPA-approved biological larvicide formulated from beneficial bacteria. When utilized as part of an Integrated Mosquito Management program, mosquitoes are targeted through each phase of the reproductive life cycle, contributing to long-term prevention and protection.