Unlike most fans heading to Mercedes-Benz Stadium in Atlanta this Sunday to see if Tom Brady can pull off another Super Bowl win, Wilson Morgan won’t be focused on the action on the field. Instead, the Auburn University junior will be watching how the field withstands football’s biggest game of the year. 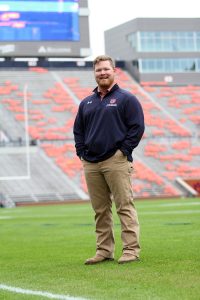 Wilson Morgan, a turf management major at Auburn University, landed a trip to Super Bowl LIII to help prepare the field for the big game in Atlanta on February 3, 2019. (Photo: Auburn University)

The Huntsville, AL native was the grand prize winner in this year’s Toro Super Bowl Sports Turf Training competition, which earned him a a trip to Super Bowl LIII to work with the grounds crew preparing the field for the big game. Morgan will spend the week leading up to the Rams and Patriots faceoff learning from the tops in the field of turf management all about synthetic field maintenance, lining, logo painting, irrigation maintenance, field preparation for media day, halftime prep, and clean-up.

Morgan, 21, is a turf management major at Auburn who says he’s known since high school that taking care of playing fields would be a career that would let him combine all of his passions. “I got some crazy looks back then,” he laughs.

It was during a greenhouse management class in the 10th grade that Morgan came across a copy of the teacher’s SportsTurf magazine, a publication of the Sports Turf Managers Association, and was struck while leafing through it by all the “serious” equipment he saw on the pages that were used to maintain sports fields. “That’s when I realized that caring for sports fields was a significant industry,” he says. “I had no idea people took care of sports fields for a living.”

An avid outdoorsman even then — he loves fishing and hunting and played football during high school — Morgan says it was then that he locked onto the idea of majoring in turf management in college. “There was no changing my mind,” he says, adding that Auburn’s Turfgrass Management Program, within its School of Agriculture, was the perfect fit to meet his goals. While his official major is Crop, Soil and Environmental Science, the turfgrass management program has offered a wide opportunity to learn how to care for a variety of field conditions and sports and tackles everything from irrigation to plant biology and weed management.

He’s been a part of Auburn’s grounds crew caring for the university’s sports fields, including Jordan-Hare Stadium — home of Tigers football — which boasts a Bermuda Grass surface and holds 70,000 fans, which becomes Alabama’s fifth-largest city on game days.

Last summer, Morgan scored an internship working on the grounds crew for the Miami Dolphins at Hard Rock Stadium, where he got his first taste of caring for an NFL team’s artificial turf and the opportunity to work side-by-side with fellow crew members who were part of the Super Bowl grounds crew.

“I started there the day after they’d had a huge concert and left the week after the first preseason game,” Morgan told The Season, Auburn University’s College of Agriculture magazine. “One thing I learned there was that managing the playing field is a full-time, year-round job.”

In 2002, Toro created the competition to give emerging sports turf professionals hands-on experience maintaining one of the highest quality and safest playing surfaces in the world and learning from top professionals in the field. Applicants — who are required to  be enrolled in at least the second year of a two-year turf program, or in at least the junior year of a four-year turf program — completed an application as well as an essay detailing their professional goals. Toro equipment and representatives have been involved in preparing the stadium and practice fields for the Super Bowl for over 50 years.

Morgan, who arrived in Atlanta a week before the February 3 game, says he’s looking forward to the experience of working with an artificial playing surface, as opposed to Auburn’s natural grass football field. “I’m also really excited to meet the crew, who are legends in the sports turf management industry.”

This summer, Morgan will expand his range of field-type expertise when he takes up residence as an intern for the Philadelphia Phillies baseball team. “That will give me experience in college sports, the NFL, and Major League Baseball,” he tells The Season. “Plus, I’ve only worked with warm-season turf, but the Phillies play on Kentucky bluegrass, so then I’d have experience managing a cool-season grass.

As for the future, Morgan says he’s conflicted about which direction he’d like to move in: baseball versus football and college versus professional sports fields. But for now, he’s focused on this once-in-a-lifetime Super Bowl experience. “This is an amazing opportunity to learn from the best of the best,” he says.

Byrnes is a freelance journalist. You can read more of her work at amybyrnes.com.