Photoscape LLC of Fort Myers, FL transformed a zero-lot-line property with a landscape design of unique plantings that maximized the 2,600 square foot project. The result? A Silver designation from NALP and five new contracts.

Not every successful landscape project has to be huge – or complex. It just needs the right elements, carefully executed.

Take the project Fort Myers, FL-based Photoscape LLC did for the Jaksichs family in the high-end Grey Oaks subdivision in Naples.

No more than 2,600 square feet was involved in the job, says Photoscape owner and president Vernon “Oliver” Ray, Ph.D., but the careful use of plantings both in front and behind the zero-lot-line home earned it a 2018 Silver designation in design/build from the National Association of Landscape Professionals.

Ray was contacted by the clients after they’d seen his work on the Houzz website. “They called me,” he says. “They didn’t want me to bid it, they just wanted me to design it and do it. I gave them a bid, as well, but they weren’t taking multiple bids.”

As long-time residents of the Naples area, the Jaksichs wanted a tropical look. However, because of the size of the new home, there wasn’t much space in which to work.

“The front of the house was a whole lot of pavers – or was going to be; we started the install before the pavers went in,” Ray explains. “They knew the abundance of pavers would detract from the beauty of their home, so they wanted an over-the-top landscape package that would pull the eye to the landscape and then the front entrance.”  While it’s not unusual for Photoscape to do paver installations, adds Ray, in this case the company was so busy, that part of the work was subbed out.

The situation in the rear of the home was somewhat similar. Although the back of the house features a pool and outdoor kitchen/patio, it was built to the zero-lot-line. “They had no backyard to speak of,” he says. “We had to talk the homeowners’ association out of six or seven feet of common area on the backside of the house.”

Still, the job should have been straightforward, except that it wasn’t. After taking a day to tear out the areas to be improved, including some old-growth hardwoods, the company began digging to plant some of the eight palm trees that went into the project – and found information on an important utility was missing. 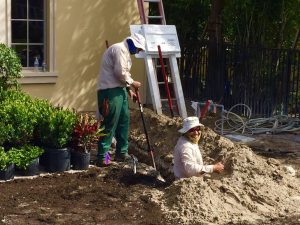 Finding the location of utilities proved a challenge.

“I have photos of my guys in five-foot holes because we had to dig up the whole yard to find where the gas main was coming through,” Ray says. “We realized there was no gas meter to the house, so the gas company had to come out and it delayed our planting for three days while we had plants on the ground.”

Once that was resolved, Photoscape installed both irrigation and lighting in the planting areas. Ray says he particularly loves lighting because it allows clients to enjoy their installations beyond just daylight hours. “It’s all ground lighting, but we also lit up the front of the house with some wall-washers,” he says. “We didn’t do any downlighting from the trees because we were dealing primarily with palms.”

Ray prides himself on his planting beds and designating the right plant for the right place. In this case, some beds received full sun, some were in partial sun, and others received virtually no direct sun. “I… use plants that are unique [and] that you rarely see in other landscapers’ designs,” he says. “I search every week on the east coast…Miami and Homestead, where 90% of the growers in the state are located. I just bring back things that are unique.”

In this case, he’s particularly proud of his use of a false Ashoka or “mast” tree at the home’s front entrance. “It’s very slow growing, but we needed some real height by the front door in a very narrow area,” Ray says. “It gives a very nice look to the front of the home.” 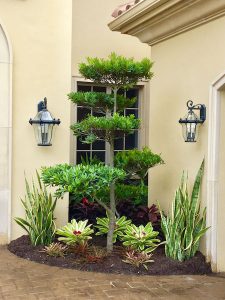 A Japanese blueberry topiary adds height in a small space.

Also, near the entrance is a Japanese Blueberry topiary, with others of the same species going into the small backyard. “The entrance is my favorite feature because it showcases two very unusual trees,” he says. “They bracket the entrance as well as you could with [the] little amounts of dirt as we had to work with. They turned out to be really smashing.”

The planting areas in the front were built up to allow irrigation water to drain off the beds onto the pavers. However, the back offered more of a drainage challenge. “In the back we dug and installed some perforated drains along both sides of the berms,” Ray explains. “The common area was higher than the grade to the house, so we had to put in drains. The plants we put in can take wet feet at times, but not all the time, and we had to find a way to get the water away from the root base of the plants.” 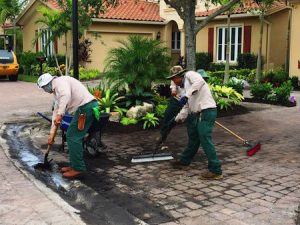 The planting areas in were built up to allow water to drain off the beds onto the pavers.

While Photoscape didn’t install the aforementioned pavers, it did incorporate some hardscape elements in the design. The planting beds include several boulders in various sizes, some up to several hundred pounds. “They’re moss boulders that I bring in from Tennessee,” Ray explains. “The boulders in Florida are very porous and in this humid climate within six months they’re full of mold and fungus and turn black, so we don’t use them.”

Ray’s other favorite – round river rock – makes an appearance in the back. The client wanted the opportunity to walk in the backyard planting area without muddying her shoes.

Ultimately, the project took less than two weeks, with Photoscape putting six men on the tear-out and up to a dozen on the rest of the work. 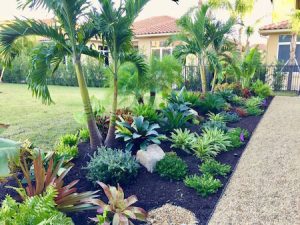 Another challenge: Transporting palm trees to a backyard of zero-lot-line homes.

Besides the headaches presented by the gas line and missing gas meter, Ray says his greatest challenge was getting the trees to the backyard. “We had an articulated loader to get the palm trees back there, but this home is surrounded by zero-lot-line homes, so it was a real challenge to get into the common area,” he says. “We had to take a section of fence and a gate out in order to get back there, but we left the area better than it was before, so it wasn’t a problem.”

The total project came in at just under $50,000. Not only did the clients have Photoscape back later to add potted plants to the pool area, but the neighbors were impressed as well, says Ray. “We got five other jobs off this one before we’d even finished it,” he says. “That’s the greatest compliment. People were walking by before we were finished with the job and giving us their contact info for other installations. That’s the best.”