At its corporate campus in Kissimmee, FL, Tupperware® has revitalized its signature hybrid tea rose. BrightView Landscapes created two rose gardens on the company’s grounds with the help of local experts.

Landscaping is often an attempt to improve on Mother Nature’s best. But, sometimes, it can also become a matter of preservation. That’s the position Tim Harris, a regional designer/project estimator for the Orlando, FL office of BrightView Landscapes, found himself in when he was called on to design two new rose gardens for the world headquarters of Tupperware®.

Faced with the near-extinction of its Tupperware hybrid tea rose, the company opted to rebuild its rose stock from five remaining plants. BrightView, which holds the maintenance contract for the corporate campus in Kissimmee, FL, was brought in to design and build the new rose gardens to showcase a portion of the revitalized roses. 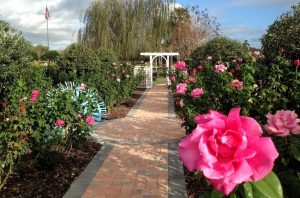 “Roses” and “Tupperware” have always been synonymous. The company vice president who developed the idea of the Tupperware sales party first commissioned a hybrid rose in 1953. Its design and color were reflected in the company’s products and use of color for many years.

Over time, the company and its leadership changed, and in 1981 a new Tupperware hybrid tea rose, with many of the same characteristics including a brilliant dark pink color and rich fragrance, was developed by rosarian J. Benjamin Williams and registered with the Library of Congress.

With its rose species, Tupperware has been careful to control the stock, planting it on its campus exclusively. So, when it became apparent in 2014 that there were only the five remaining plants, the company sprang into action, hiring rosarian Wendell Ulmer, owner of HeavenSent LLC in Apopka, FL, who suggested the roses could be repropagated.

BrightView’s Harris explains that the existing rose plants were dug out and taken to O.F. Nelson & Sons Nursery/Nelsons Florida Roses, also in Apopka. The company is known for bringing roses to the Sunshine State.

“They have a patent on a special root stock called Fortuniana that’s nematode-resistant,” Harris explains. “They took cuttings off the plants, rooted them, and then grafted them onto the Fortuniana rootstock. They were able to replicate from those remaining plants approximately 300 Tupperware roses.”

It was at that point that Harris was brought in to design two roses gardens, a North Garden and a South Garden. The project won a 2018 silver Award of Excellence for a design/build project of $25,000-$100,000 from the National Association of Landscape Professionals  (NALP).

He explains that the size of the Tupperware headquarters building is such that a garden at either end would make it more convenient for employees and visitors to enjoy the roses.

“They also have two ponds on either end of the building, so it balances it out,” he says.

However, the two gardens, each approximately 40’x 80′, are not identical. The North Garden is laid out in the shape of the letter “H” and includes four benches and a 16′ x 10′ pergola for shade, while the South Garden has a single walkway and three benches.

Part of the difference is due to the presence of trees at the two sites. While a Weeping Willow was left as part of the South Garden, a Tabebuia on the site of the North Garden was relocated just to the north of that garden and closer to the pond.

Harris is particularly proud that the tree was able to be successfully relocated.

“We used a tree spade, and it didn’t even go through any transplant shock,” he says. “It didn’t drop a leaf.”

Other than moving the Tabebuia tree, site preparation for the two gardens was simple. “Each area was just sod, which we cut and removed,” Harris says. “It was also pure, clean, and weed-free, so we didn’t have to do any chemical weed treatment.”

Hardscape for the project included paver walkways and freestanding wall blocks columns with caps to support a gate for each garden.

“We went with the pavers for aesthetic reasons,” says Harris. “We didn’t want to pour an impervious surface, and these are ADA- (Americans with Disabilities Act) compliant. It’s very simple construction.”

Because of its location in a former swamp, the water table at the site is fairly high. Rosarian Ulmer created a special soil mix for the gardens which was used both for planting the roses — which Ulmer handled — and to raise the grade of the entire garden slightly to promote natural drainage.

At the same time, some irrigation was required for the roses.

“We did spray-stake irrigation, which is a low-volume irrigation,” Harris says. “Each rose has its own spray-stake spraying water at the bottom of the plant, so the foliage doesn’t get wet and promote powdery mildew or black spot.”

While the roses — approximately 160 of them split between the two gardens (the unused roses are held in containers in a specially built nursery holding facility and may go into another rose garden at a later date) — may have made a straightforward move to their new locations, not all the plantings were as accommodating. 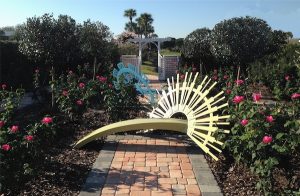 Tupperware commissioned a local artist to make the metal benches for the two gardens. The benches are designed to mimic the company’s logo. Shown here is the North Garden.

The roses, which are planted 4′ apart, were to be set off with Majestic Beauty® Indian Hawthorn shrubs, which were to be used as topiary in the gardens. However, they became what Harris refers to as “quite an issue.”

“We procured them at a nursery that had field-grown them,” he explains. “We planted them after they had been freshly harvested, and they went through severe transplant shock. We lost all but two of them, and a lot of time and energy and money was spent.”

Instead of replacing like-for-like, Harris then opted to go with container-grown Feijoa (also known as Pineapple Guava), which can be maintained into a globular canopy structure.

The other piece of the plant palette for the project also presented a challenge. Harris says one of the main parts of his design dealt with controlling the deer which populate the woods around the Tupperware campus, and just love to eat roses.

His solution: a 5′ tall fence with metal posts and a green vinyl-coated material of rectangles measuring 2″ X 4″, which was then heavily planted with Podocarpus. 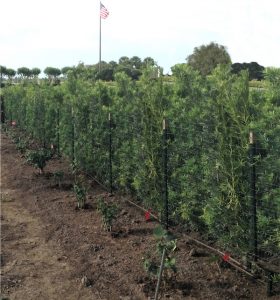 The deer-barrier fence installed in the South Garden.

“The Podocarpus is growing through the fence so the garden is very hard to see,” Harris says. “In fact, we had a $4,000 change order on that part of the job because the client’s landscape superintendent, Bill Pearson (who supervised the job for Tupperware) wanted them planted so tightly we had to buy more Podocarpus and plant it so the root balls were touching. We didn’t even dig individual holes.”

As finishing touches on the project, Tupperware had two gates specially made that mimic the gate at the campus’s original rose garden and commissioned a local artist/sculptor to make the metal benches for the two gardens.

The benches are designed to pick up the on the Tupperware logo, and on a large fountain in the building’s main entrance. Harris says the benches have become one of his favorite features with the project.

Harris estimates he spent about 140 hours designing the project, with a four-man BrightView crew and rosarian Ulmer spending another 350 man-hours to make it a reality.

Certainly, his experience with the Majestic Beauty Indian Hawthorns was the most challenging part of the job, and while the clients were happy with the job, Harris says if nothing else the project taught him to be firm when the need arises.

“They wanted the rose gardens in by a certain deadline, so we rushed to harvest those main topiary trees,” Harris says. “I wanted them harvested and then held to get through the transplant shock. We ended up taking them freshly harvested and they shocked on us severely after we installed them.

“I learned a valuable lesson and will never repeat that mistake,” he concludes, adding that overall the project was unique in its purpose, design coordination, and cooperation and should serve the Tupperware employees for years to come.