The World Cup, which takes place every four years, is the world’s most anticipated sporting event. The 2014 tournament in Brazil drew an estimated 3.2 billion viewers (television and online), according to FIFA, the governing body of international soccer. While the U.S. team’s failure to qualify is resulting in a dramatically lower interest in North America, hundreds of millions of other fans worldwide elsewhere were glued to the action. 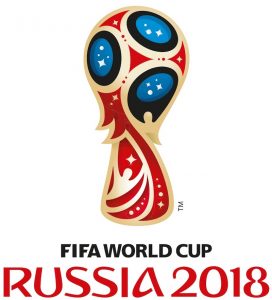 The 2018 Cup began June 14 and culminates July 15 with the championship match in Moscow. The tournament features 32 teams playing 64 matches on 12 stadiums in 11 Russian cities.

Spectators, whether in person or viewing remotely, want to see their favorite teams and players performing at their highest levels. Most of these fans are probably unaware of the vital importance of the playing surfaces within each of these stadiums – that is as long as these pitches do not somehow negatively affect the quality of play or, worse yet, impact the outcome of a contest. The less attention they generate, the better. That means they are performing as they should.

FIFA insists that World Cup contests be played on grass, real grass, not synthetic turf. Incredible efforts go into providing these turfgrass pitches for the World Cup, including the 2018 games, of course.

Incredible efforts? Let’s go back 25 years to one uniquely remarkable field, then briefly describe the high-tech, turfgrass pitches now being used in Russia.

In 1994, and after almost three years of intense research, field trials and (it was reported at the time) a few sleepless nights, turfgrass experts at Michigan State University oversaw the installation of the most unique soccer pitch in FIFA World Cup history. They successfully prepared a healthy, green turfgrass pitch inside the Silverdome in Pontiac, Michigan, responding to orders from FIFA that World Cup games be played only on turfgrass… even inside a fully enclosed stadium.

By any measure, promising to construct a world-class grass pitch in a massive, fully enclosed structure whose fiberglass, fabric roof allows only 10 percent of natural light to reach it is a huge challenge. And, in a sense, a gamble, as it had never been done before in under such low light levels and with the very real possibility of high humidity, one of the main causes of turf-damaging diseases.

Without wading too deeply into details, here’s how the MSU team did it relying on California-grown sod consisting of a mixture of 85 percent Kentucky bluegrass and 15 percent perennial ryegrass. The grass pitch was rushed across the nation in refrigerated trucks during the winter of 1992-93, and initially installed inside the Silverdome for several “friendly” international soccer matches in 1993. After hosting games for both men’s and women’s international teams and also a Jehovah’s Witness Convention, the grass was removed to a nearby outside location and carefully maintained.

Using what they had learned from that 1993 field installation, the MSU team in June 1994, oversaw the forklifting of the same 1850 steel, 49-square-foot, hexagonal modules to form the base for the grass pitch. They then meticulously prepared a compacted soil mixture within the modules over which they installed the pampered turfgrass sod. They put down the sod so there would be no seams to negatively affect ball roll or player performance. The installation for the 1994 games took a mere 30 hours.

To the immense relieve of the researchers – including field installers and grass maintainers – the pitch held up extremely well, and drew praise from players and officials alike.

None of the 12 Cup stadiums in Russia is being played completely indoors, so this year’s grass Cup pitches were prepared in a more traditional manner… but with a twist.

For example, while FIFA continues to insist that all games be played on real grass fields, they don’t have to be 100 percent turfgrass. The 2018 World Cup pitches also contain poly fibers inserted among the blades of grass, comprising as much as five percent of the playing surface. 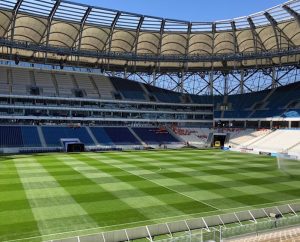 UK-based SIS Pitches installed its reinforced natural turf system on six of the World Cup venues. The laser-guided incorporation of plastic fibers into the turfgrass root zone gives the pitch increased stability, and delivers considerably longer playing hours than natural grass surfaces, the company says. The fibers are injected into the root zone via a slow-moving, rectangular vehicle, which is slightly smaller than a school bus.

Three of the SIS Pitches, including Luzhniki Stadium in Moscow, site of the championship contest, will also feature SISAir technology, which manages soil moisture and removes excess water from the soil via pipes under the pitch and forces air movement under the turfgrass roots, says the company.

The 1994 U.S. World Cup, won by Brazil, is ancient history. Similarly, the 2018 World Cup in Russia will soon be history, as is the Silverdome, which was demolished in December 2017. The lessons learned in terms of playing field design and maintenance in each World Cup will be help make future Cup pitches more attractive, more durable, and safer.

Qatar, with just 2.5 million people, has already begun building stadiums for the 2022 World Cup. Their construction will largely determine the design and composition of the turfgrass pitches for the tournament. The tiny desert nation (most of the country is dominated by sand dunes and salt flats) will be the first Middle Eastern nation to host the tournament. Because summer temperatures there average 105°F during June, July and August, the 2022 tournament will begin November 21 and conclude December 18.

You can reach Hall at ronnie@groupc.com.